I’m all moved in! My apartment is in the BA barrio of Palermo, in a complex called Color Botánico. Literally..SO NICE. And the area surrounding it is incredible! There’s tons of cute cafés, bars, and librerias scattered along the streets. At first when I moved in, I had the awkward 3rd bed near the kitchen (and next to the door) since I was the last one to move in, but I’ve relocated to the couch (so just transfer that image of my bed tBelow are some pictures of the neighborhood and my apartment! 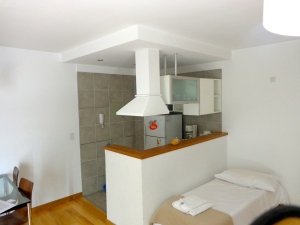 The awkward location of my uncomfortable cot (what I used to sleep in..) 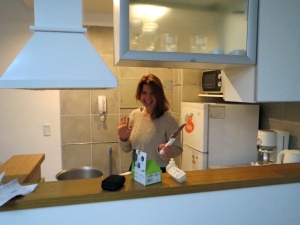 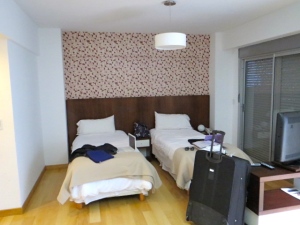 To be honest the city itself is pretty dirty and disorganized, but it’s been through a lot throughout the years. It’s still an amazing place, however. I’ve been lucky enough to already see most of it from walking around, taking the colectivo (bus) across, and riding the subte (metro..which is GREAT). Every SINGLE block is so diverse than the others, and it’s obvious the divide between the different barrios. Pieces of the city are reminiscent of Italy, but overall it takes on its own “aura” so to speak that doesn’t let you forget that you’re in South America –which, I think, is pretty awesome. And the people here are SO NICE. SOOO MUCH NICER than the Spaniards! Everyone smiles at you, coos at babies and dogs, and loves to talk to you at restaurants/in line. I’m surprised how much spanish I’ve already spoken in such a short amount of time.

some shweet graffiti in San Telmo

one of the city’s many plazas

outside the MALBA with one of the many polka dot trees 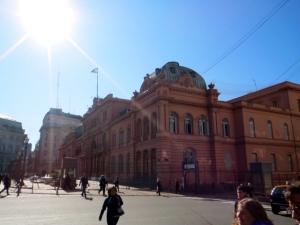 Casa Rosado (because, you know, White Houses are so 1776)