Monday was ADVENTUROUS to say the least!

A few days earlier, I had wandered around Avenida Sante Fe with some friends, when we had stumbled upon a piercing shop. I got my marilyn re-pierced (…..ouch) and the employees were so nice, I guess we figured it only appropriate we make a prompt return.

So Monday, Tania got her traigus pierced, Sarah her cartilidge, and Jamila scheduled an appointment for a tattoo! I persistently (euphemism for annoyingly…) asked multiple times “Se puede poner un anillo en el nariz en vez de un pendiente?” but they wouldn’t let up on their “safety standards” so I didn’t follow through on that one.

Jamila tattooed a small sun {from the center of the Argentinian flag} on her wrist. Pictures to come! It’s beautiful and truly the work of an artist, so anyone interested in getting tatt-ed in BsAs, I recommend White Devil Tattoo. 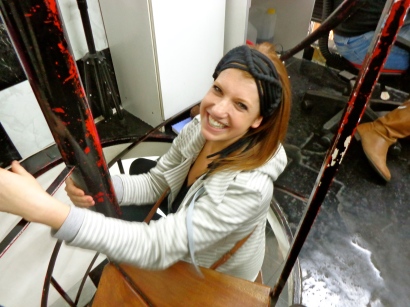 just chillin on the staircase as everyone else got stabbed, pricked, and stitched

Then, that night we were invited to the BsAs Planetarium to celebrate LA LUNA LLENA! It’s basically an outdoor gathering on the banks of the lake, under the planetarium, complete with several bonfires (or else you would literally freeze to death) and a drum circle.

It might have been my favorite night out in BsAs! At one point, I found myself in the middle of the (really intense) drum circle and decided to pick up a drum and join in. It was so fun, and I was getting cheered on for a while before I got really intimidated by the heavy stare of the drum circle leader and decided to salgo that. I met people from Chile, Brazil, Venezuela, and beyond. There were talented free-style rappers, tambourine players…even fire dancers.

Below are 2 event descriptions of La Fiesta de la Luna Llena. The first is how my friend, Jamila described it (and I thought it was too good not to share!) and the second is from the facebook description (for those who  don’t know spanish, the gist of the message is that it’s a party to celebrate the moon queen for all her glory…super hippie yadeeyadeeya). Enjoy, and happy full moon ☽

1) Nothing like being invited to a “full moon party” at the local planetarium only to discover that its not actually inside. Then spend the next hours dancing in 45 degree weather next to flame throwers, and drummers, singing spanish songs with guitarists (who are trying to convince you to move to Cuba) and meeting people asking you if you want a “box of wine.” Oh the half truths of Buenos Aires